Publication date
April 18, 2022
Authors
Brendan D. Turley, Mandy Karnauskas, Matthew D. Campbell, David S. Hanisko, Christopher R. Kelble
Journal
Harmful Algae, Volume 114, 2022, 102223, ISSN 1568-9883, https://doi.org/10.1016/j.hal.2022.102223.
Abstract
Harmful algal blooms (HABs) caused by the dinoflagellate Karenia brevis on the West Florida Shelf have become a nearly annual occurrence causing widespread ecological and economic harm. Effects range from minor respiratory irritation and localized fish kills to large-scale and long-term events causing massive mortalities to marine organisms. Reports of hypoxia on the shelf have been infrequent; however, there have been some indications that some HABs have been associated with localized hypoxia. We examined oceanographic data from 2004 to 2019 across the West Florida Shelf to determine the frequency of hypoxia and to assess its association with known HABs. Hypoxia was present in 5 of the 16 years examined and was always found shoreward of the 50-meter bathymetry line. There were 2 clusters of recurrent hypoxia: midshelf off the Big Bend coast and near the southwest Florida coast. We identified 3 hypoxic events that were characterized by multiple conductivity, temperature, and depth (CTD) casts and occurred concurrently with extreme HABs in 2005, 2014, and 2018. These HAB-hypoxia events occurred when K. brevis blooms initiated in early summer months and persisted into the fall likely driven by increased biological oxygen demand from decaying algal biomass and reduced water column ventilation due to stratification. There were also four years, 2011, 2013, 2015, and 2017, with low dissolved oxygen located near the shelf break that were likely associated with upwelling of deeper Gulf of Mexico water onto the shelf. We had difficulty in assessing the spatiotemporal extent of these events due to limited data availability and potentially unobserved hypoxia due to the inconsistent difference between the bottom of the CTD cast and the seafloor. While we cannot unequivocally explain the association between extreme HABs and hypoxia on the West Florida Shelf, there is sufficient evidence to suggest a causal linkage between them.
DOI
//doi.org/10.1016/j.hal.2022.102223
Region
Gulf of Mexico 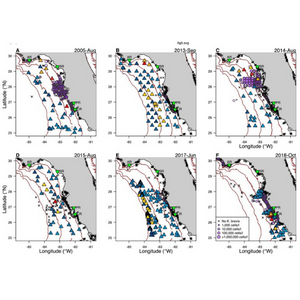