Before being banned by the International Whaling Committee in 1955, commercial whaling drastically reduced whale populations in the North Atlantic. Some species that were heavily affected by whaling have seen a steady recovery since the ban, like the humpback whale. Others, like the critically endangered North Atlantic right whale (NARW), are still faced with extinction. The most recent population estimates for the NARW put the median population size near 450 individuals, and in 2017, the population of NARW suffered severe losses due to boat strikes and entanglements1. All marine mammals are given protected status in the Northeast Large Marine Ecosystem, along with two species of fish, and all sea turtles. 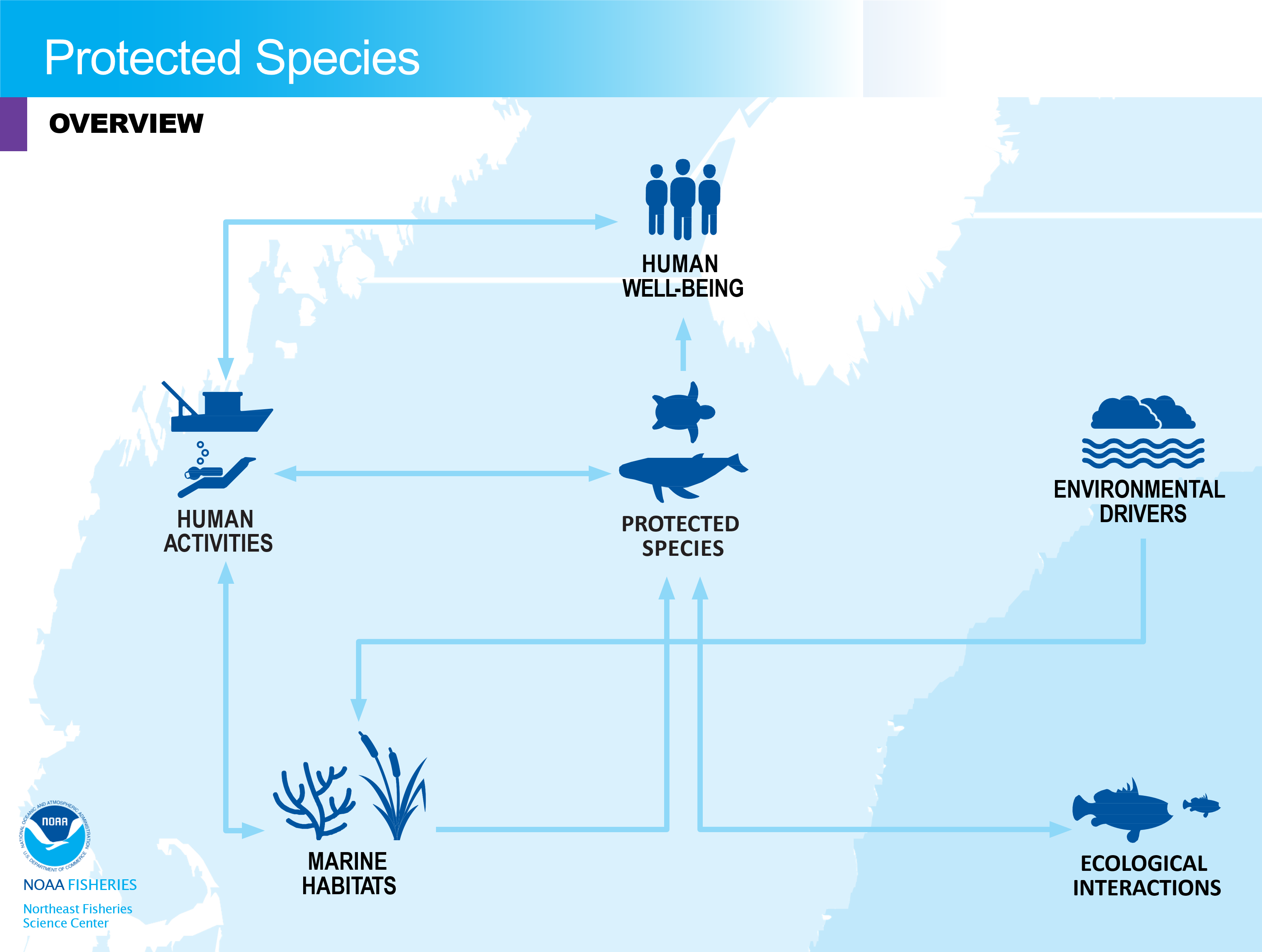 Georges Bank is critical habitat for protected species, and in particular, the northern portion of the Bank is an important feeding ground for baleen whales and other cetaceans that converge on the Bank during the Atlantic herring spawning season2. Marine turtles such as the leatherback (Dermochelys coriacea) are seen frequently in the region, and loggerhead (Caretta caretta) and Kemp’s ridley (Lepidochelys kempii) turtles are also seen seasonally3. 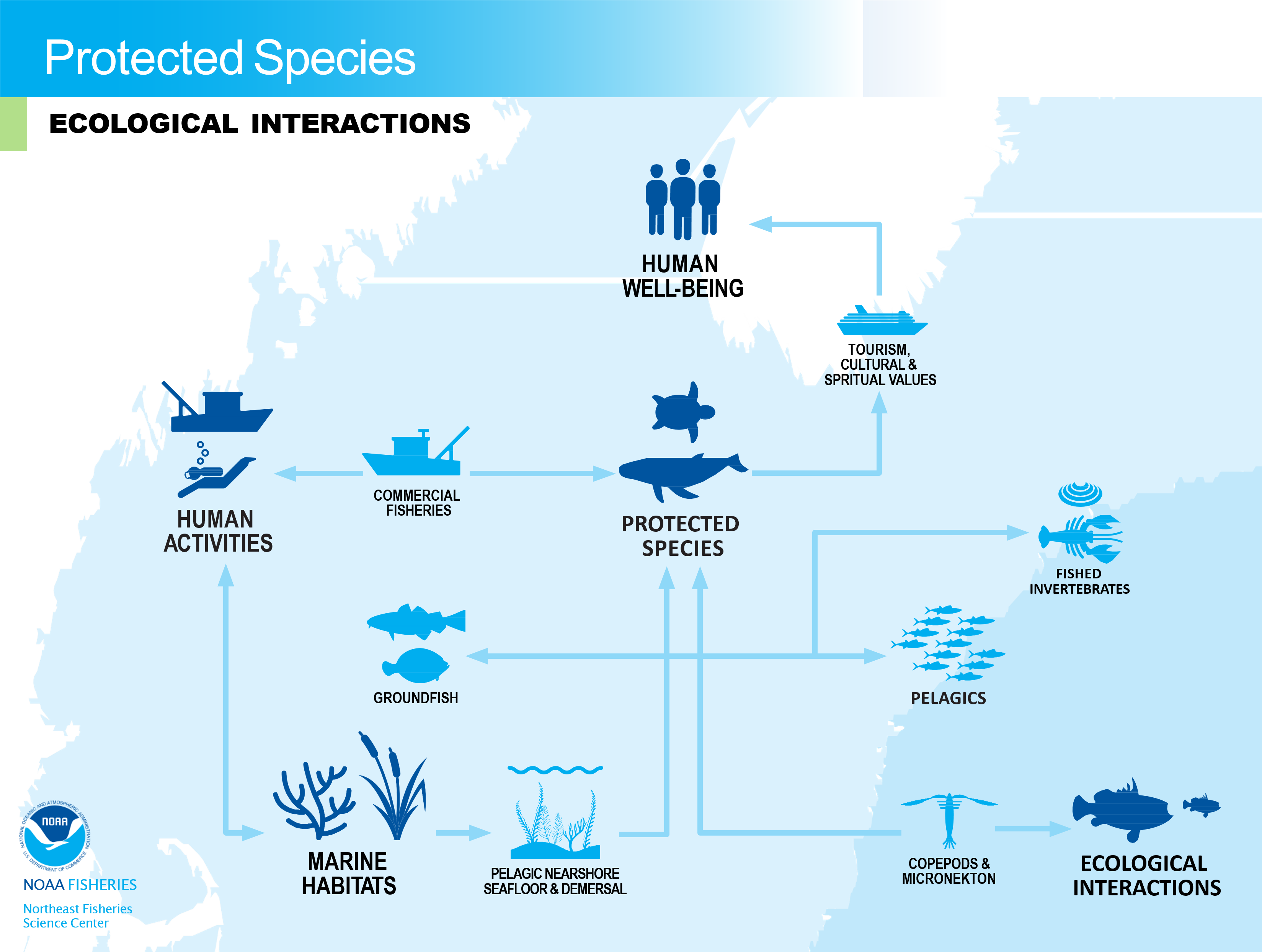 Protected species have a strong influence on the local ecology. Marine mammal prey consumption is estimated to be similar in magnitude to that of commercial fishery landings for small pelagic and groundfish prey1. Consumption by marine mammals ranges from large quantities of zooplankton by baleen whales, to groundfish, forage fish, and squid by seals and odontocetes. Much ecological interaction occurs in pelagic habitat, although protected species also consume benthic prey, and sturgeon and salmon inhabit estuaries and rivers for portions of their lifetimes. 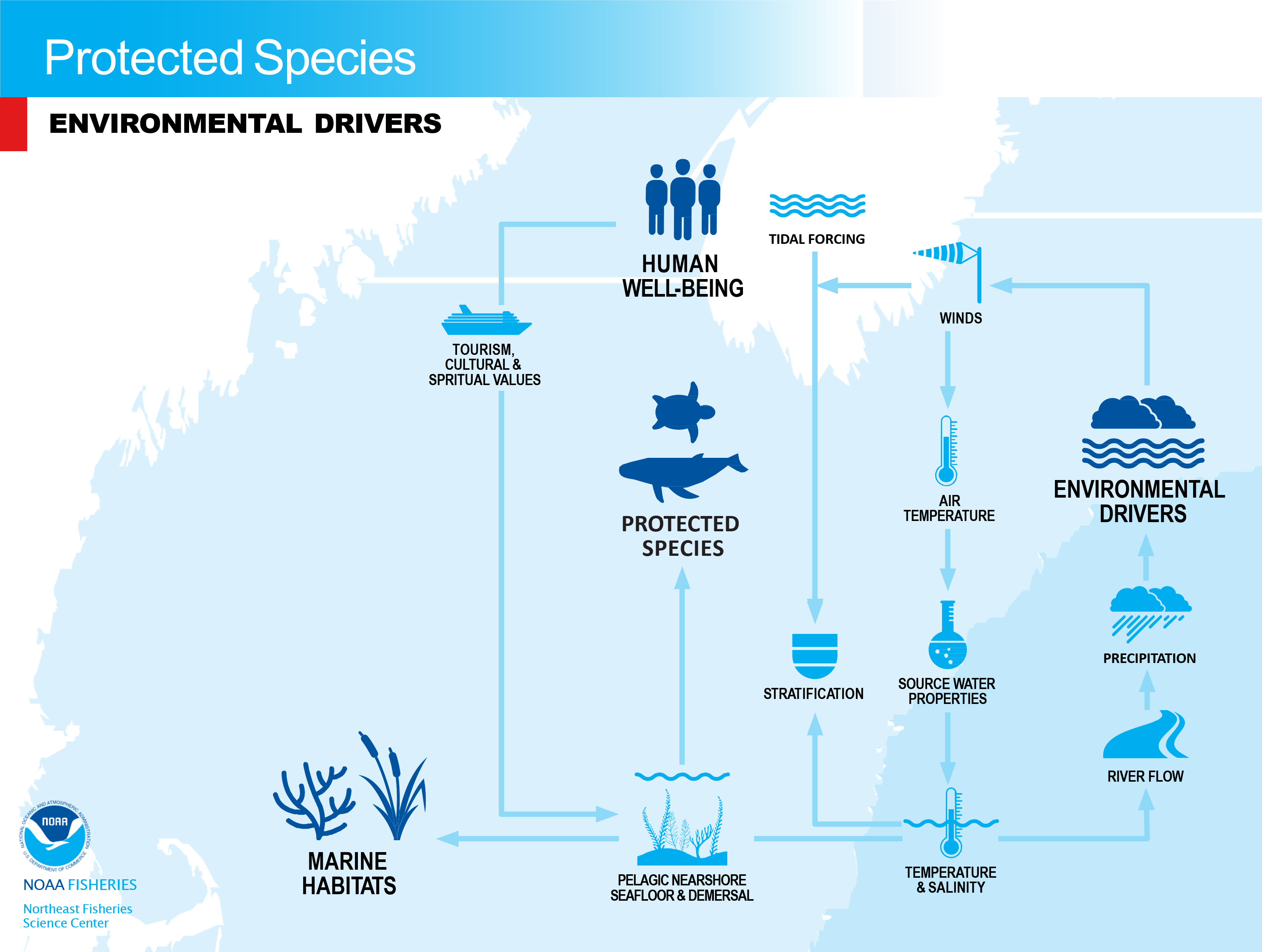 The distribution and abundance of protected species is strongly impacted by bathymetry and oceanographic structures, that in turn, influence the distribution of prey resources and pelagic habitat. Water temperature, stratification, and mixing help to dictate the location of dense prey resources needed to sustain large marine mammals. Ocean density differences shaped by tidal forces, stratification, and sub-mesoscale currents influence the distribution of zooplankton consumed by baleen whale and can also drive aggregations of higher trophic level prey consumed by odontocetes. Seasonal temperature changes also result in seasonal distribution shifts in many marine mammals, seabirds, and sea turtles. Protected fish species such as sturgeon and salmon are also influenced by river flow and seasonal weather shifts. 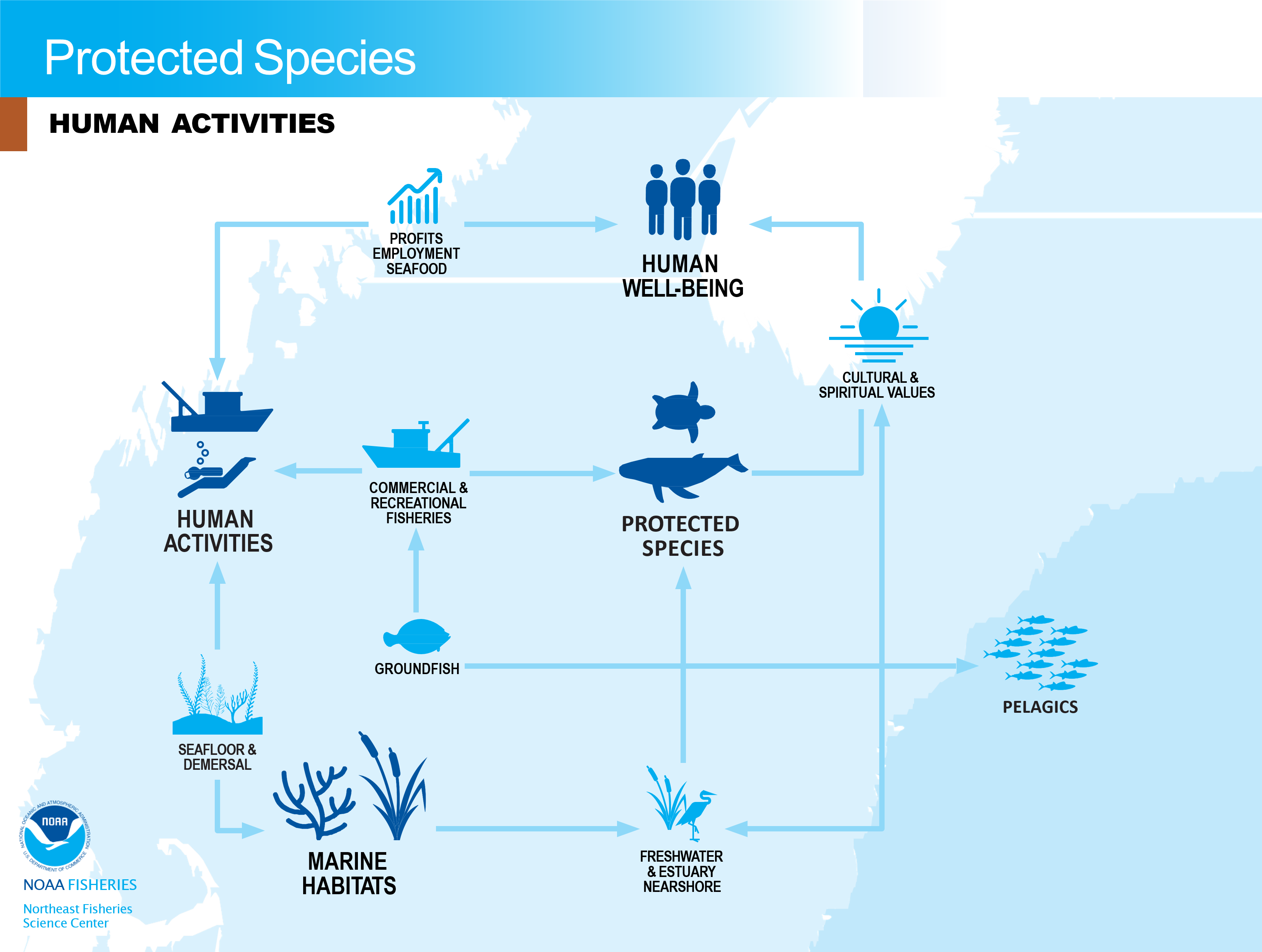 Humans have a direct impact on a number of protected species. The population of the endangered north Atlantic right whale (Eubalaena glacialis) has been severely impacted by ship strikes and gear entanglement. The US is working collaboratively with Canada to take steps to reduce right whale deaths by potentially limiting fishing activities, researching alternate fishing gears less harmful to whales, and reducing ship speeds. Marine mammals are also negatively impacted by anthropogenic ocean noise, which limits acoustic communication1. These acoustic disturbances come from shipping and are also a concern with regards to offshore energy development and the multiple wind farms planned on the continental shelf. A number of pinnipeds and odontocetes are commonly incidentally killed in fishing gear, however some species, such as the harbor porpoise, has seen bycatch reduced in recent years to the lowest numbers recorded. Some industries also profit directly from protected species via ecotourism and whale watching.