Over 2000 species of benthic invertebrates, or those species whose habitat is on or associated with the seafloor, have been identified in the Northeast Large Marine Ecosystem (NE-LME). Within this group are the most important fished species in the Northeast US, including sea scallop, American lobster, eastern oyster, and blue crab among others. Benthic animals at lower trophic levels play important roles in energy transfer and nutrient recycling by consuming plankton and detritus and then serving as prey species for higher trophic levels. Benthic invertebrates also remove contaminants in water and sediments, and are used as indicators of habitat quality because of their close association with sediments and sedentary lifestyle. While these animals are quantified in survey trawls, most species that are not commercially fished are not sampled well by survey trawl gear. A study conducted during 1956-1965 remains the most comprehensive source of information on broad-scale distribution patterns throughout the NES LME and adjacent continental slope1. More localized benthic surveys occurred during the mid-1990s to late-2000s, which focused on the effects of closed areas and trawling on benthos and fish communities2-4. 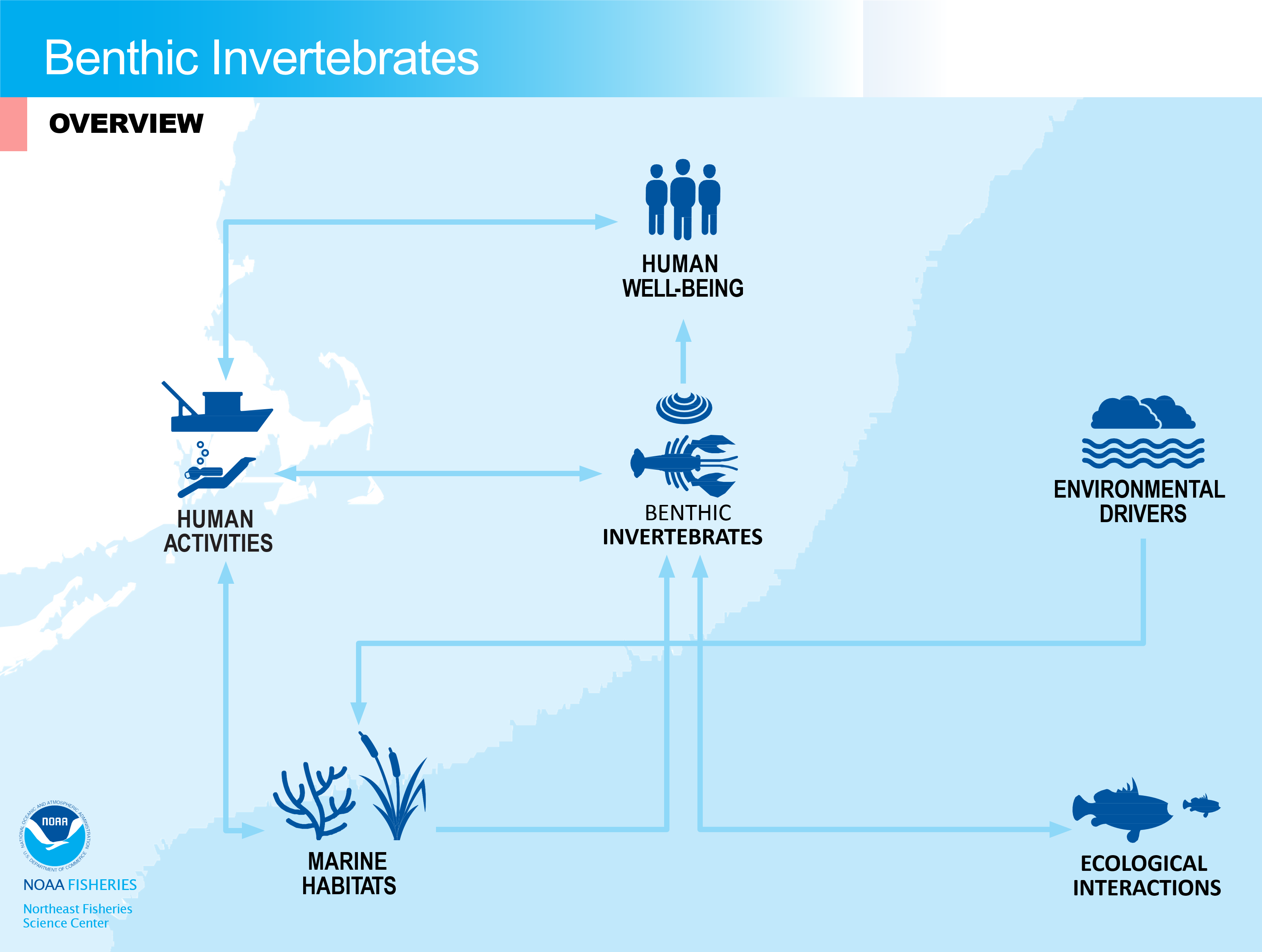 Economically valuable benthic invertebrates like sea scallop and American lobster have seen significant increases in fall and spring surveyed biomass, along with accompanying recent increases in both landings and revenue. Lady crab, spider crab, and Atlantic rock crab are common but minor contributors to fall survey biomass of benthic species on Georges Bank, whereas in the spring survey, Atlantic rock crab and Northern stone crab tend to be more prevalent.

Sea scallop tends to form the majority of surveyed benthic invertebrate biomass in the Mid-Atlantic. Other common contributors to survey biomass include horseshoe crab, American lobster, Jonah crab, blue crab. Horseshoe crabs contributed to spikes in surveyed benthic invertebrate biomass during the 1980s, with sea scallops being dominant in the survey thereafter. 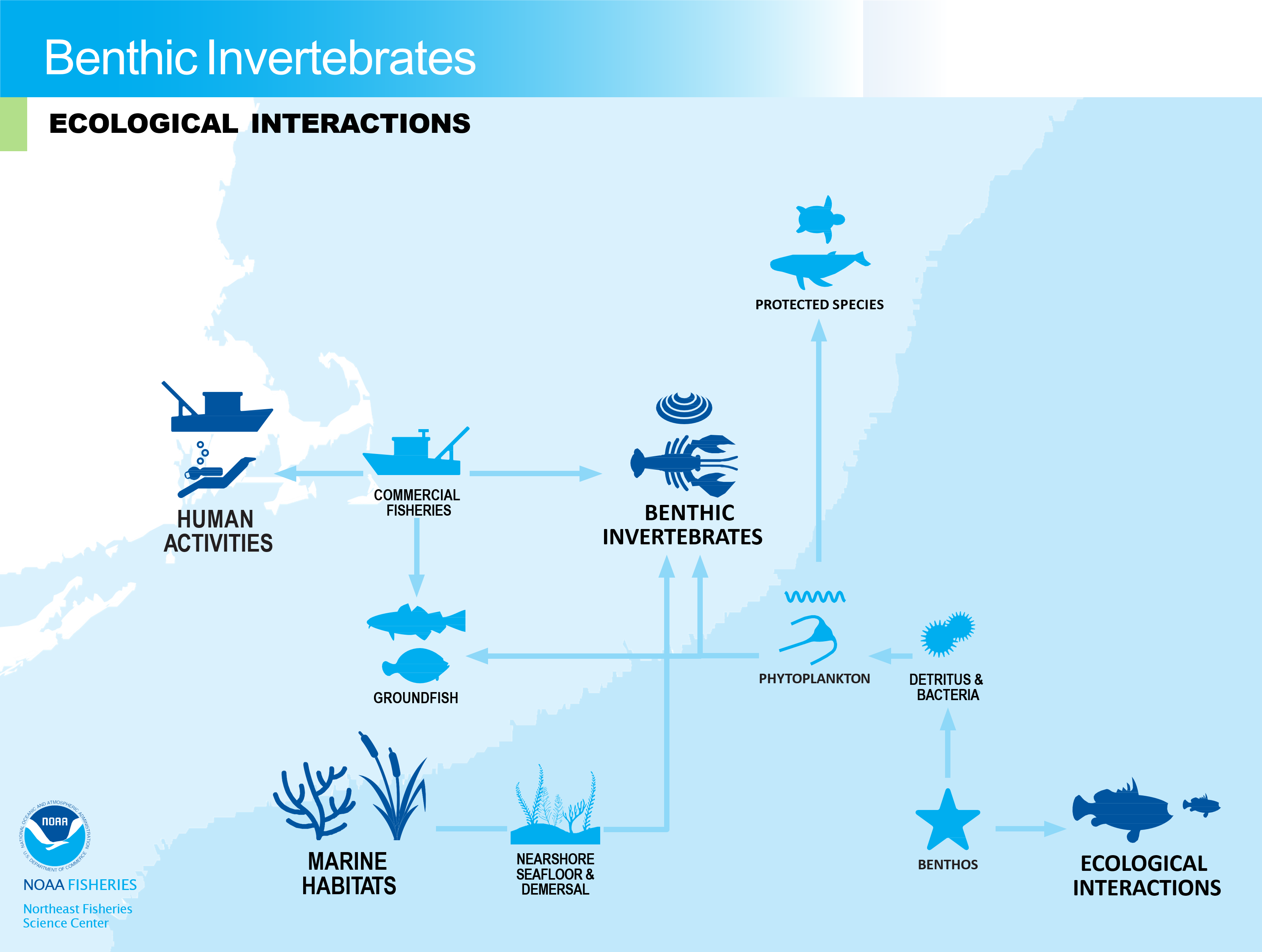 Species within the benthic invertebrates group play critical roles in the ecology of the northwest Atlantic. Filter feeders like sea scallop, Atlantic surfclam, and eastern oyster are important in the transferring of suspended organic matter to the benthos, introducing significant inputs of carbon into the sediment1,2. These species are key food sources for higher trophic level groundfish and the benthivores, such as the American lobster, blue crab, and Jonah crab. Predation also plays a role in the recruitment of fished invertebrates, and predation pressure by decapods and other benthic invertebrates is known to be a strong mediator of shellfish recruitment3. Benthic organisms attached to hard substrates (bedrock, boulders, cobble etc) also play an important role in increasing the structural complexity of these habitats. In shallow-water environments, attached benthic organisms in hard substrate areas, including sponges, hydroids, anemones, oysters, mussels, jingle shells, serve to structure the habitats in important ways, often defining the character of the benthic community and again providing cover for resident and transient fishes. 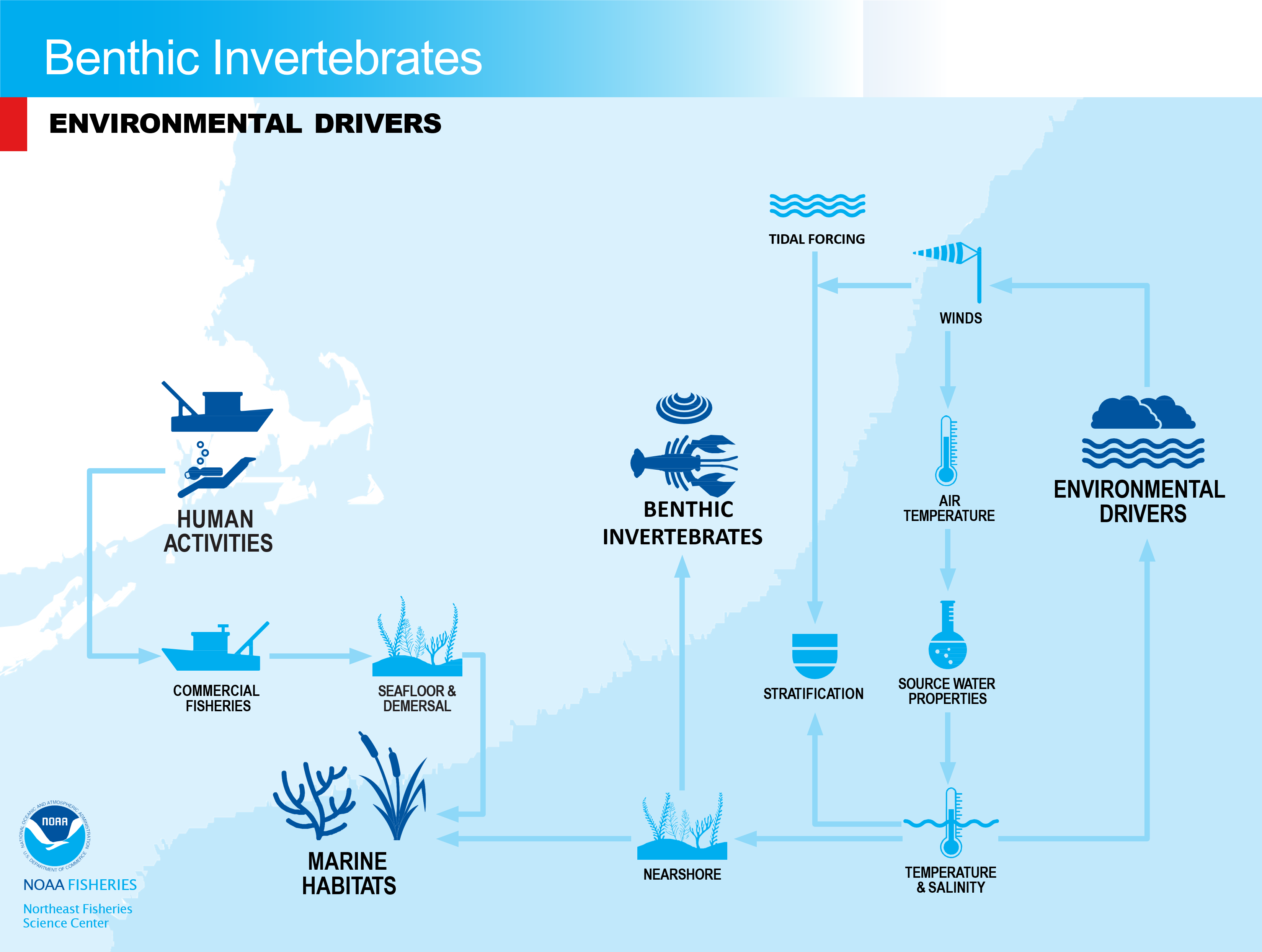 Environmental factors play a role in all of the life-stages of benthic invertebrate species. More mobile species that prefer colder waters, such as the American lobster, will actively avoid waters >18°C1. Demersal filter feeders, such as the sea scallop or sedentary eastern oyster, rely on physical forcing of currents to disperse their fertilized larvae, which remain in the water column until recruitment to the benthos or oyster reef respectively. Distributions of benthic invertebrates is related to sediment grain size, sediment organic content (an indicator of food availability), and oxygen content at depth. Organisms that feed by filtering food particles from the sediment prefer habitat with smaller grain size (e.g. mud or clay), whereas animals scraping food off of the bottom surface, such as the sand dollar, prefer sandy environments. Benthic organisms are sensitive to ambient environmental cues, including temperature and salinity, throughout their life cycles2 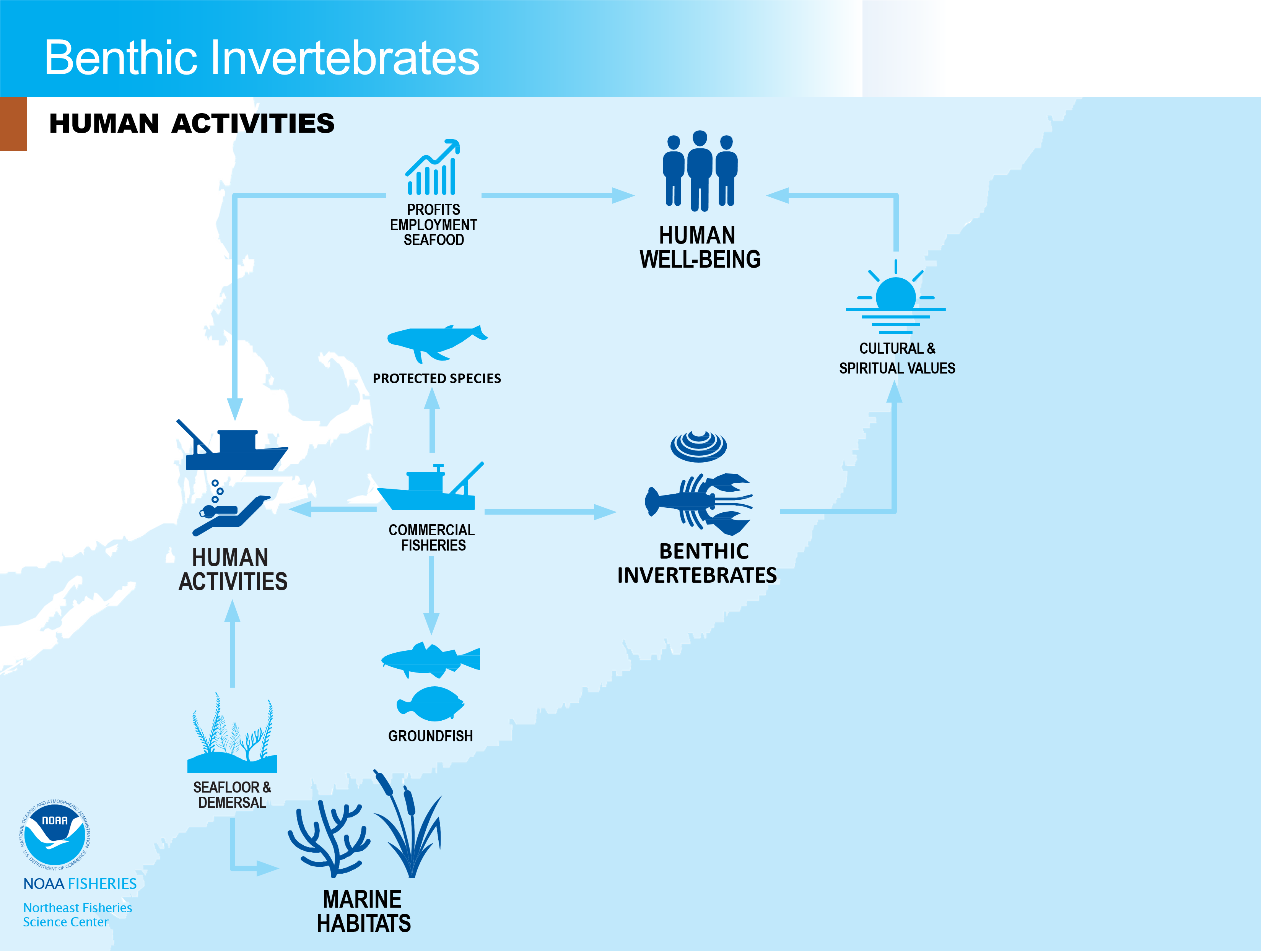 Surface and bottom temperatures in the northwest Atlantic are projected to warm rapidly over the next century, inevitably affecting populations of sensitive benthic invertebrates. In southern New England, indicators for American lobster reproductive and recruitment success are projected to decline under current warming scenarios, possibly resulting in a focal shift of the nearshore lobster fishery to deeper offshore stocks1. Ocean warming will also likely affect the distributions of sea scallop, which could see a decrease in suitable thermal habitat under current warming scenarios2. In addition to warming, ocean acidification is likely to decrease invertebrate populations as well as the harvest levels of commercially important species such as sea scallops, due to decreased recruitment and slower growth3. Human activities that threaten fished invertebrates also reverberate through critical ecosystems. For example, historic decline of oyster reefs in Chesapeake Bay due to overfishing led to a decrease in water filtration capacity by nearly 200 times the pre-harvested rate4. Furthermore, fishing gear that comes into contact with the seafloor (e.g. trawls, dredges, traps etc) has the potential to disrupt benthic habitat and community structure5-7.